The Return of Smoking Boy, laughing and sharing one Peter Jackson at a time.

The other day I was talking with my mother who remarked on the fact she hadn’t seen an update on my blog lately. Then she said, ‘I really want to know what Smoking Boy is up to’, like he was some kind of superhero. Which would be totally awesome.

So here is the latest entry from Smoking Boy, illustrated by this insanely appropriate picture I found courtesy of Google Images and Motivated Posters. 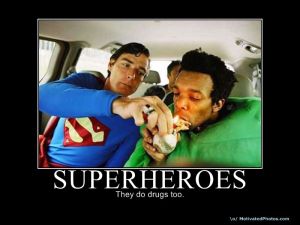 Wow! The last two days have bean heaven and hell for me. I got  lighter off Dave yesterday and smoked heaps. The first morning break I had 2 PJ’s, ate a small Mars Bar and then lit up again. I had to give half away to Tom cause I couldn’t last.

Trouble is brewing for Smoking Boy. His very powers seem to be acting as a kryptonite against him.

Last night Dave stayed over and we smoked out the window. The room smelt so bad in the morning. Mum & Dad seem like they know something but I’m not sure. I think it’s just Mum being really suspicious.

No shit Smoking Boy. You smoked out a window, room smelt like smoke, Mum is suspicious. It’s a fairly linear cause and effect equation.

I felt SO sick after last night. We had approximately 20 mins sleep. Dave smoked about eight and I had four or five. He is so… grouse (for need of a better word). We have so much fun together – when we play or not.

Smoking Boy is totally getting out-smoked by his side kick Band Boy and he can’t even tell. Smoking Boy needs to sharpen up.

Melanie rang tonight and “apparently” she’s started smoking. I believe it but she has no reason to – not that I do – hee hee! It’d be great if we all go see a movie and I’ve got my own smokes. I wouldn’t have to scab off Lara or Nick. Fun!

A new Superhero in town! SMOKING GIRL! Check out Smoking Boy judging her try hard smoking efforts. Cos he’s a total smoking veteran now, and she’s trying to superhero it up on his turf and shit.

Tomorrow is the last day of band. I’m gonna miss everyone until I see them again soon. I’ll miss everything – the playing, the smoking, the talking, laughing, etc.

This is almost as fun as ‘we play, we smoke, we share…’. In fact, possibly even more fun.

Well, I suppose I should sleep ‘cause I’ve got a pretty big day tomorrow.

Goodnight Smoking Boy! Until your next rebellious teen adventure!

This entry was posted in The Teenage Years - Uncut, Uncategorized and tagged Smoking, superheros. Bookmark the permalink.

One response to “The Return of Smoking Boy, laughing and sharing one Peter Jackson at a time.”